Will we focus on our differences, or on what we have in common? This is a key question with wich author of this paper would like to crtitice the destructive national chauvinism and religious identity politics that have torn Bosnia apart and not only Bosnia. Author's wish is to show that this is not the true face of traditional Bosnia, but that Bosnian heritage and tradition, properly understood, could serve as a model not only of, but also for interreligious relations in Europe and the world. He thus not only accept, but strongly promote - in this time of cult of ethnocentricity, or madness of ethnicity - the very idea of Bosnia as a microcosm - a paradigm - of global relations over centuries. In this sense the 1992-95 war between competing ethno-religious particularisms, styled "the war against Bosnia", is only its Frankenstein appearance. Hence the support of Bosnia model and paradigm is not a matter of choice, but the issue which make up or breaks up the picture of modern world, reinforcing or weakening the trust in the unity of that world, reinforcing or weakening the trust in the unity of that world, especially in the context of the enlarged Europe and our euro-atlantic integrations.

So, according to the author, if you take this Bosnian heritage properly understood, then you will see Bosnia as a unique place in the world, the paradigm of the structure of the global concept, a locus where the issue of multiculturalism is not just a brilliant theoretical elaboration of this concept, but the experience of a centuries old way of life by that model. True, as a result of a tragedy of cosmic proportions (especially after the massacre and genocide in Srebrenica) which happened there before the eyes of the entire world, this Bosnian paradigm and heritage were marred and pushed aside. However, even after all those tragic events (last year was sad tenth anniversary of what happened in Srebrenica), the awareness is growing of seeking resort in this model of thinking and living as the only possible and realistic prospect. 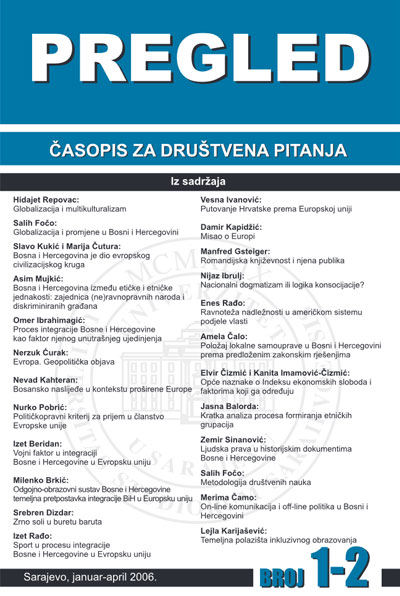